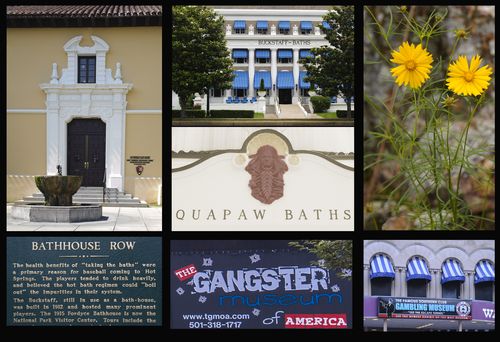 They say there are two sides to every coin - so true at Hot Springs National Park, Arkansas.

After the Civil War, veterans took to the thermal waters of Hot Springs Reserve hoping to heal the injuries they sustained in the war. It was a place of last resort for many. Later, in the early 1900's, luxurious bath houses sprang up, offering an American version of the health spas popular in Europe.  A 21-day treatment regimen was offered to wealthy visitors hoping to cure their ailments.  (By now, the "dirty" soldiers had been shunted off to the newly built Army Navy Hospital at the end of Bathhouse Row. This hospital was a predecessor to the VA system hospitals.)

One wealthy gentleman, Samuel Fordyce, was told he had six months to live.  A trip to the waters in Hot Springs was his last hope.  After treatment, he lived another 42 years.  His recovery lead him to develop the crème de la crème of bath houses, the Fordyce, which now serves as the park's visitor center and museum.

On the other side of the street, another story has played out.  Today, amongst the fudge and t-shirt shops, there are reminders of where else hope has sprung in Hot Springs :  hopes for a winning season, luck of the draw, and someone else to take care of your problems for you.  During prohibition up to the late 50's a certain lawlessness prevailed. Here died the first ranger in the US to be shot and killed on the job. (His killer was subsequently acquitted).

Sometimes the two worlds intersect, particularly for the players in baseball teams that attended Spring training here. There were times when Babe Ruth needed to get a bender sweated out of him or to do strength training in the gym at one of the bathhouse.  Al Capone and his "gangsta" cronies were careful not to cross the street and risk arrest from Feds just within spitting distance.  At the Ohio Club, you could gamble and drink if you knew the password.  (And they still serve a good hamburger today - you can take a shot at your cholesterol level after a massage at the Buckstaff or Quapaw).

During my residency at Hot Springs National Park, I had hopes too.  In addition to mixing it up artistically, I fervently hoped not to get bit by one of the 6 venomous snakes in the area.  I was lucky - I submersed myself in the waters and my art.  I also logged 16 snake-free miles.  Whoopi!